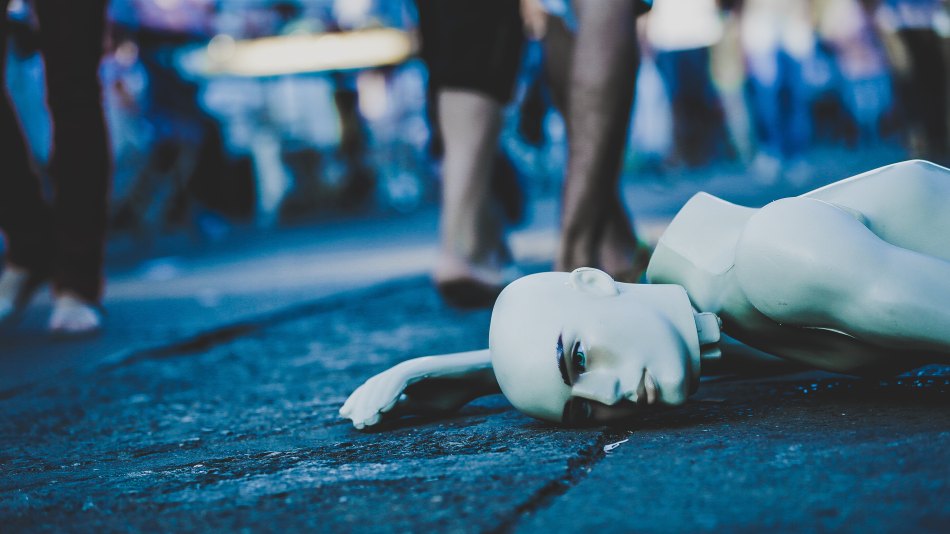 was it yesterday
you

the sea was so vast that we could not cross it
give us a boat
a boat for two people
two of us will row our boat, my love and I

a season goes by and the night elongates
someone goes to a winter field and finds a watermelon
and after eating it the disease was cured
so the man and the man lived happily ever after
even when we say forget fireworks, it’s not even summer yet
we look up at the sparks and admire them in the end
those seasons were fleeting
we ate everything down to seafood soup and got up
and went to a lodging
after scratching each other’s back
we talked about a small puppy’s small life before falling asleep
that there’s that kind of situation too
was it yesterday?

I bet a small dog sees those things?
I approached and watched you watching those things
and grabbed your hands right away
and barked woof woof
I am a small dog
I’ve been waiting for the song I’ve heard in a dreamland
do whatever you want

was it yesterday?
I was told to be prepared and
went onto your boat
so let us row a boat
to the vast sea
to the place where there’s no fear

The Love of Brothers

But
please don’t say that their love isn’t love

God Almighty
please look at the love of brothers

If you want to do it at lunch, let’s do it after dinner
I washed apricots
as I talked and sang to you
Wait until I push aside the fog that’s surrounding me
and stand in front of you with transparent looks
We bit an apricot
and embellished a poem called “a wife that had popped up from a box”
Summer rain halted
and inside the wife I saw yesterday were rocks and papers
The wife was sitting by the window and smoking a cigarette
with her face that belongs to the dropwort family

Putting together apricot seeds to one side
they indeed did it
They put leeches on the temple of the wife
who goes to a dreamland every night
and let it suck up the dream.

They are in the 21st century
They are in the Joseon dynasty
They use a charcoal fire
They roast pork
They lie with their faces down in a system called green phytocoenosis
In such life cycle
they overcome fruitless endeavors
and think of historical moments
under their own comforters
Stay away
from Gwanghwamun Geumnamro L.A. Koreatown
A dreamland of a neighboring person
Our heaven
There are many temptations to sink down
but with reverence and love
turn away from it and
listen to me
The world of God the wife believes
is a box of dropwort
Listen to me
I should drop Gil La-im into a poem

But
please don’t say that their love isn’t love

The disease turned out to be
AIDS

he did his best to survive but
he died
in blue

What a blue penis
His eyes are blue too

He, no longer living,
watched living people through blue
It was time for him to close his eyes
but he kept blinking his eyes

Blue
the last surviving disease of mine

Blue let him live and killed him

All his self-portraits then
closed their eyes eternally

* At that time, I was a struggling artist that nobody knew, and I was prone to indulge in alcohol, men, and women. Still, I was a young man who was trying to find out if there is something to discover in a color and two lines called life and death. And it was at the height of the future. In the future, I saw only a white thing in his blue. In the white, there were two lines. Life and death were not two distinctive lines. He saved the blue as a result of the unknown disease, but I could save the blue as a result of the known disease. That is to say, saving the white thing.

Blowjobs are a specialty of Grandpa Andy, who turned 99 years old this year. In the lower part of the town, everyone knows that Grandpa Andy can let semen out in a minute, even when his penis is helplessly drugged. Of course, no one knows how beautifully Grandpa Andy sings in the Lambert Park—the song he chanted with his lips that were burst after being battered by Americans who look like horse shit; the song he sang in spangle pants with mermaids.* I clearly remember that night. The night when I crowned Duchamp’s pissing penis with a red lipstick while hiding in a wooden boat; the night when black birds dropped their beaks and soared into the air as they shook off the green shawl of Marilyn trees—with Duchamp, I listened to Grandpa Andy’s song that was as enchanting as Mommy’s silk satin dress. In the emerald sky that could be seen through the window of the wooden boat, a mirror ball spun and spun. And finally, when Duchamp pissed recklessly and came out of the back of the wooden boat as he shook his hips, the morning dawned again in the Lambert Park. It was me who found Grandpa Andy’s corpse with a Budweiser shoved in the asshole. I am a quick boy of the Lambert Park. It was a nickname I got after finishing off priest Roberto’s dick in a minute. Everything happens during the Sacrament of Penance. His original name is Andy, Andy Warhol. It was Mommy, once called Punch Drunk Munroe, who raised this idea. It’s disgustingly out of style. I know it too. 1963. I’m going to record the face of a man whose dick is getting sucked by five beautiful young men* and make it into a movie.* And the night when I turn 99, I will die in the Lambert Park.

* A slang in D’Alembert’s region. It refers to male to female crossdressers—translator.

* I, quick boy, made up my mind. I will hire an actor like monk Willard—writer who wrote in accordance with the footnote of the narrator.

In an empty summer classroom where purple rain comes, I sucked emotion for the first time. The emotion was murky like when I jammed my soccer cleats on partway while clenching my molars. Moths of time burgeoned in a white cloud out the window where I was kneeling.

To the command of a herd of toads that were marching down the wet school yard in single file, my buddy dashed with all his might. I recalled his sparkling dribble. His lips said “fuck” every time he scored, and they were quite magical. The emotion muddled up with drools was soft and slippery.

Soon it ran down in stream. Hiding the testicles of emotion, my buddy gave me a dry and lovely kick. It was when I, inside the window, looked at myself like an old priest, having been eaten up by time. He pulled up his pants stained with poop and disappeared and was beautiful and. I whispered like a wedding veil. Goodbye.

And nobody had seen them. Nobody. Yes, nobody.

Why have we, who were wiping Hometown ketchup with a napkin from Uncle’s Burger, aged so hastily? The tattered night when we wear a wig curled like a sausage and drink fetid beer. I sing unintelligibly. For the sake of the buddies who shot a rocket beyond the boy’s orbit even before the countdown was over. Goodbye, for the sake of the emotion of the homos with yellow buck teeth at a glory hole, the homos who still must be fleeing from purple summer in their crumpled soccer cleats—And cheers.

*Here are the songs that lent a hand to this song. The disenchantment of spring, the song of purple summer, H and autumn and H of autumn, and Min, the season that does not exist in this world. 1-1

1-1)  I thought of introducing songs that lent a hand to this footnote, but I decided to leave it in the dark. Except I’ve listened to John and Charles and Gregg and Min’s Origin of Love, White Puppy like a Beggar, Coach Wrongs Me, and When You Were a Boy…

*This word comes from a Greek prefix meaning “to be alike.” In consequence, in many European languages, “homo” still means “to be the same.” It is sometimes used as a shortened version of “homosexuality”, but since the start of the LGBT rights movement, male homosexuals have been called “gays” and female homosexuals “lesbians”—translator.

*In place of the public restroom that provided space for the hole, I bleakly draw in pop artist Keith Haring’s work Glory Hole (1980).

*Footnotes are a part of the poems and were not added by the translator from Nabillera. 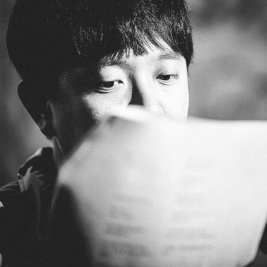 Kim Hyun [김현] debuted in 2009 when his poems were introduced in Jakgasegye in 2009. Since then, he has published the poetry anthologies Glory Hole and When the Lips Open and prose anthologies Don’t Worry and Go and Sweater Anyways. He also compiled We Need a Feminist Teacher with other contributors. 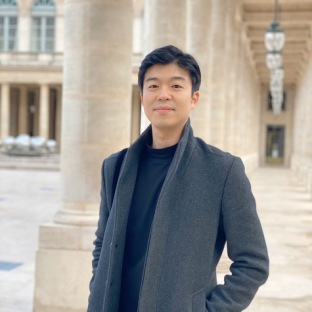 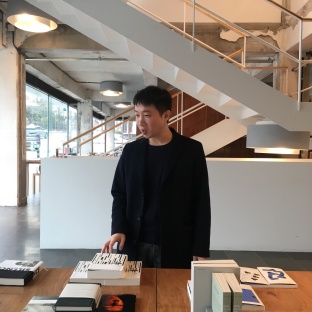 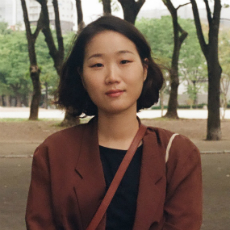 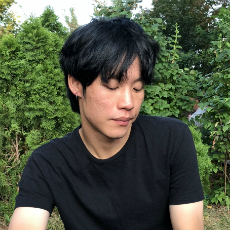 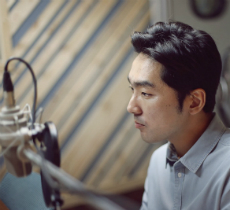 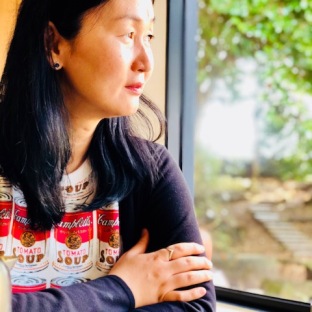 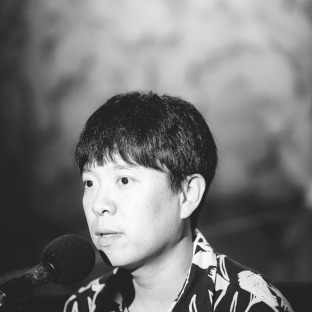 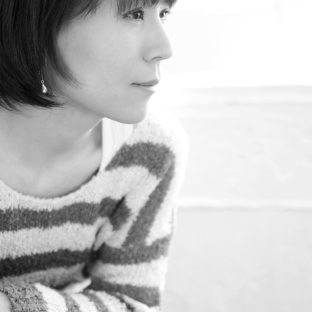 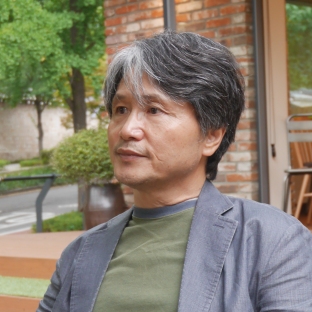 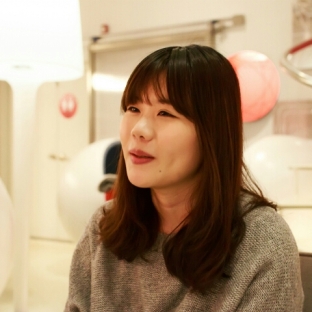 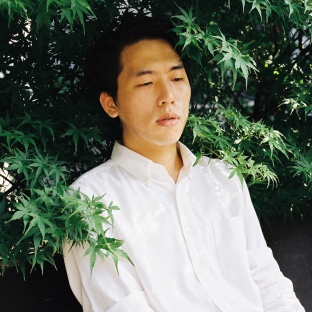 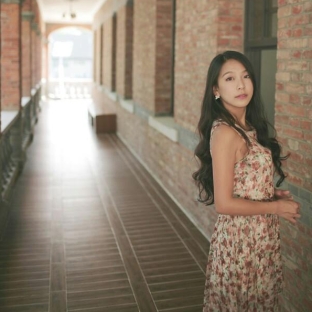 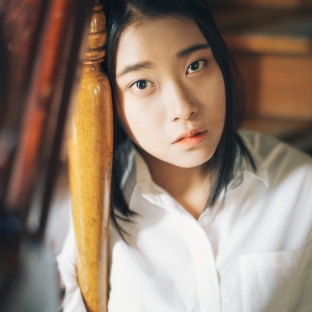